Know Why to Build Smartwatch Apps and Get Some Design Tips? 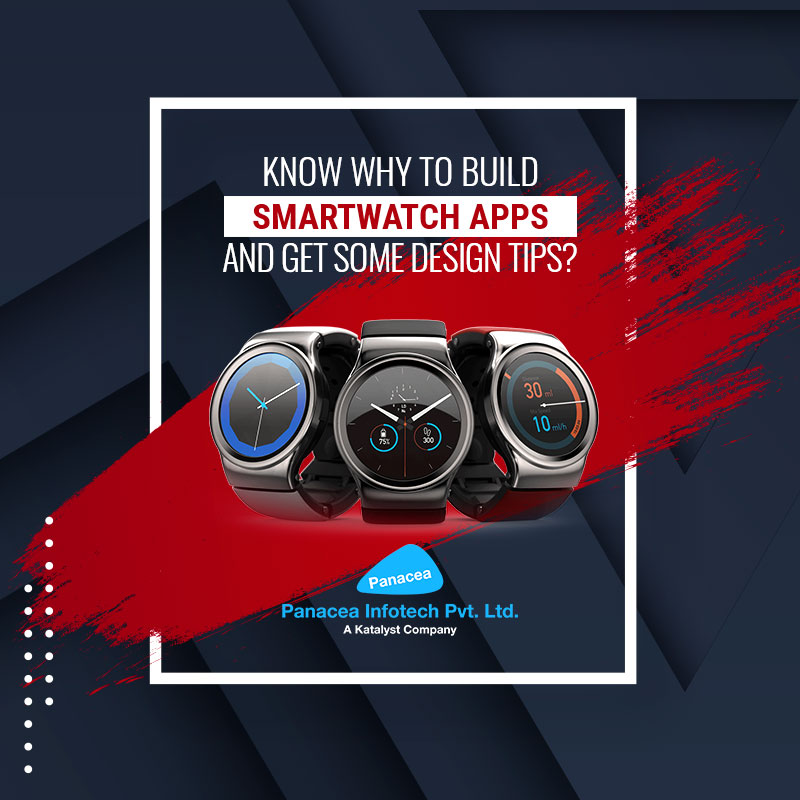 The Wrist Revolution Is On The Way!

Wearable technology is on the verge of becoming the hottest trend in the upcoming years. Technology giants such as Apple, Samsung and Sony have already launched their respective Smartwatches in the market and created enough buzz regarding their features and functionality. In fact, in the year 2015, this wearable technology may get the gadget of the year honor.

Smartwatch is a wearable mobile device having touchscreen display. It connects to the internet (via smartphone or directly) and runs apps. Though, it is a recent phenomenon, it has succeeded in gaining attention of the people in a very short time. Many renowned mobile companies have started manufacturing Smartwatches along with their smartphones and started launching them in various gadget events and launches. No wonder that the Smartwatches have already created enough buzz to arouse the curiosity for them among technology enthusiasts and entrepreneurs.

Get More Time for Life!

In today’s fast paced world, everyone like to be well informed and connected. It is what makes Smartwatches very appealing.

Smartwatch keeps you away from your smartphone and enable you to perform various crucial and fundamental activities that you perform using your smartphone. They enable you to receive and make calls, receive updates, text messages, and important alerts, make payments, keep timings etc. They stay connected with users and help them get more time for their life.

Technology geeks are making continuous effort to come up with smart devices to stay healthy in the competition of today’s smart world. Smartwatches are one of the key devices that are being looked after by many Smartphone players to get a competition edge. Therefore, we can see a wide range of Smartwatches available in the market that include Apple watch, Pebble Times, Samsung Gear, LG G, Moto 360 and more.

As people care about little increase in speed and convenience, the change is inevitable. Smartwatch is what people are looking as a device that enable them to experience more comfort while using smartphone functionality. Consumers like to use the devices or applications that make data consumption and creation more convenient. Smartwatches are all about speed and convenience. Developers should understand this need and start creating right apps for Smartwatches.

Existing Smartwatches having 5 significant features that include notifications, time keeping, fashion, fitness and payment. With their potential to replace your mobile and wallet in the near future, it would not be a wrong to say that the Smartwatch apps will be a new way of interaction for businesses with their consumers.

Therefore, the early movers who move to Smartwatch app development by recognizing this wonderful opportunity, certainly stay ahead of the coming competition in Smartwatch app arena. However, before moving forward it is important to take a glance at existing Smartwatch scenario.

Today’s Smartwatch market is being dominated by Apple watch and Android wear platform. There is a great debate as to which Smartwatch delivers the best experience on the wrist.
Though there is similarity in most of the features in Apple watch and Android wear, when it comes to the apps, there is bit difference. You need to connect your Apple watch to your iPhone when you want to use third-party apps. When it comes to browsing through the apps, it is easier in Apple watch than Android wear. By pressing the digital crown of Apple Watch you can view everything on one screen.
Android wear offers a great functionality that go beyond mere notifications as Android wear support has been added to smartphone apps by many developers. You can make purchase from Amazon, book a ride or add items in your to-do list app easily from your wrist.
Undoubtedly, it will be interesting to see the approach of both of these Smartwatch players in the future. Also, the battle for supremacy between them seems last as it is in the near future.

Designing apps for Smartwatches is pretty different than designing apps for smartphones and desktop. You really need to think carefully regarding the actions and information you are going to present to the users before begin to build an app. The challenging part is to build an app that will go well with round and square displays of Smartwatches. Therefore, the developers should adapt whole new rule sets to develop a successful Smartwatch app.
Here are few essential aspects that need to be considered before building quality apps for Smartwatches.

Here, we have outlined some design tips

Always remember the model for which you are developing an app such as LG, Sony or Pebble. Hence, tailor your app to that model. For example, full color touchscreen used by LG G watches.
Avoid creating interaction zones and buttons too bulky while using touch friendly elements.
It is better to keep screen content static. The content that is highly active doesn’t go well with the small display.
Practicality is the prime aspect when it comes to Smartwatches. Therefore, keep minimum functionality.
Keep the font size moderate. Don’t make it too large or too small. Test out your fonts on the devices to determine their perfection.
Incorporate the use of features of hardware such as pedometers, heart rate monitors and more.
It is evident that the Smartwatches would be the most significant entity in wearable device category in the coming future. Therefore, businesses should focus on wearable development to get a competitive edge in the upcoming years.
We at Panacea, a team of mobile application developers and software developers proficient in latest technology and always keep up with the new innovations. We have right people, information, knowledge and technology to turn your ideas into successful websites and apps. We serve you as your Smartwatch app development partner. Contact us to know what we can do for you.