A Relative Study on iOS Vs Android

With the smartphone segment witnessing a familiar battle on a year-on-year basis, a tug of war between Apple Vs Android is quite common though! iOS application development Vs Android app development has rather been vying each other for a leading market share and supremacy ever since they have secured their place in the market. 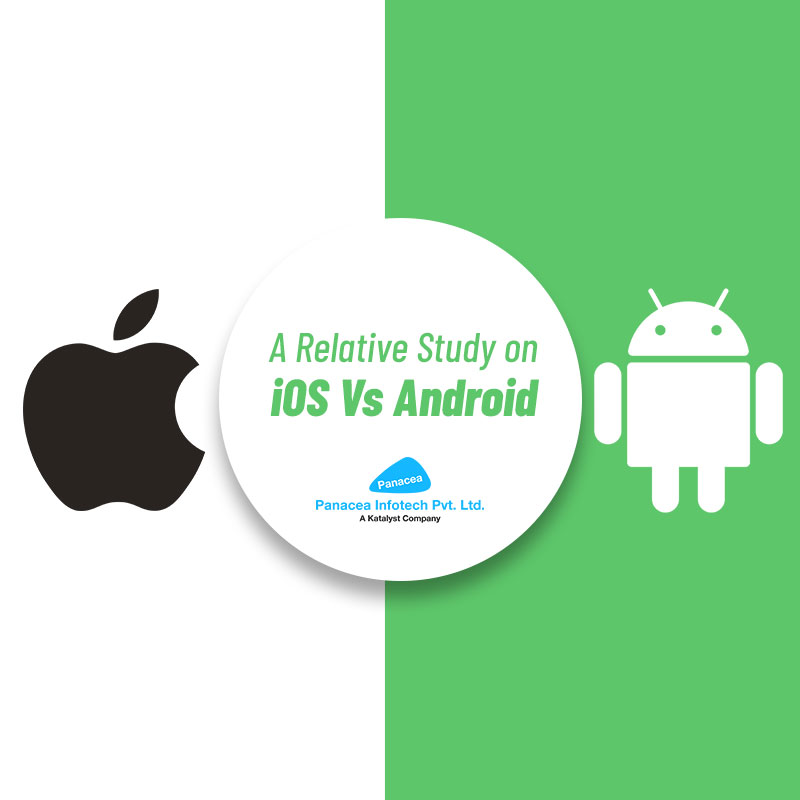 Together, they have created a Duopoly and account for more than 99% in smartphone sales. However, this post is going to shed a thorough light on a comparative study between Apple and Android.

There are several core differences between Android and iOS that affect user experience at its foundation and the choices we make when we engage with either of them. Apple is incredibly strict when it comes to app submissions, push notifications, rules and timelines, Also, they push operating system updates to users to ensure the consistent experience for them.

On the other hand, Android apps can be updated even without a human review. They are also fragmented across various phone manufacturers such as Samsung, LG, HTC and Motorola, which gives a customizable experience to the end user.

Now, both of these scenarios come with benefits and disadvantages, and if you ask the users of either iOS or Android, they will definitely opt for the one which they are comfortable with. Apple users are usually loyal to the consistent experience across all their devices and any updates that come along, while Android users vouch for more freedom and customizability their devices provide.

There are differences in demographics too-

As mentioned earlier, Android currently has the largest global platform share, with a particular prominence in lower income areas and developing nations. Comparatively, iOS users typically have higher income, higher education levels and more engagement, Of course, that doesn’t mean that those who have those same characteristics won’t own an Android device. Instead, this data is simply indicative of the general Android population.

Men are slightly more likely to be iOS users than women. Android seems to be the most common platform among all age groups. Android has a more market share in developing nations like Asia and Africa while iOS leads the market in developed countries like US, Australia, Europe etc. This may be due to the various cultural and socio-economic factors that are in play in the local geographies.

At the same time, Android exhibits a high level of device fragmentation due to the huge variety of models and varieties available. This becomes a problem when a lot of Android users are still running their devices on older versions of the OS. This is a big headache when it comes to fixing the bugs, and it creates vulnerability and security concerns as well. However, with very few models on board, this is not a problem with the Apple users.

Also, In terms of User Interface and experience, Apple seems to clearly top the charts, followed closely by Android at the second place. iOS offers a simple and clean interface, that is easy to use and navigate, while Android offers a deep-set of menus to choose and use.

As the OS model is more open in Android compared to Apple, it is slightly more vulnerable to hacks and cyber threats. The device fragmentation and openness of installing apps that are from third-party makes Android OS susceptible to security concerns. On the other hand, Apple iOS is very rigid in giving access to the user’s locations and contact info.

To conclude, Apple and Android, seem to dominate the market together and are equally good in their own terms. Choosing one over the other becomes a matter of personal preferences or by one that is governed by your business needs. So, if you are an individual planning to buy a new Mobile phone or a Business Owner who has hired a Mobile Application Development Company in USA to build his first App, it’s suggested that you do your homework. Identify your needs, preferences, time and budget and use these as a criterion for your decision-making, as both are Tech giants come with awesome products.

Panacea Infotech is one of the best mobile application development companies in USA, helping businesses to execute their first-rate ideas into viable digital solutions. Also, we have been helping organizations across the world to achieve their business objectives with high-quality solutions in an array of different services.